Open Source - it's not about free as in beer or speech

But when I think about what attracts me to open source software, like free as in beer, free as in speech is only an advantage, a nice to have, it’s not the primary attraction.

So firstly, why isn’t free as in beer the primary attraction to me? The answer is it’s about risk. Dijkstra famously stated that we should count lines of code as “lines spent” rather than “lines produced”. Every line of code in your system is a line of code that you must understand and maintain for the life of that system. The more lines of code, the more complexity, the harder the system is to understand, the more expensive it is to maintain.

This doesn’t just apply to the code that you write - it applies to the third party libraries that you’re using. Every library that you use is another layer of code, another part of the system that you have to maintain, and so counts towards the number of lines spent. It may be a commercial library that you’re paying someone else to maintain - but it’s still your responsibility to ensure that it is maintained since it’s your system that the library is running in. When you pay someone to maintain a library for you, you are only delegating that responibility, not transferring it.

So, let’s say there was a library that I wanted to use, and it was free, as in beer, but there was no source code available for it. I could take the binaries, call them my own, use them in my own system, they are free, but I could never get the source code, I had to rely on the maintainer. Would I use such a library? Never. The risk is simply too high, since that library is part of my system, it’s my responsibility to maintain it. But I can’t maintain it myself, since I don’t have the source code. And because I’m not paying the maintainer for it, I can’t delegate the responsibility to them, because they have no obligation to me to fulfil that responsibility. Hence, I cannot use the library since I cannot be held responsibible for it. So, while free as in beer is great, it is not the primary advantage of open source, there are more important things than free as in beer.

So what about free as in speech? An open source library allows me the freedom to maintain and modify it myself, as a last resort I can always fork it. This is an advantage since it means I can always assume the maintenance of that library myself, and that means I can take responsibility for it. But is that the primary advantage? Let’s consider you had a choice of two libraries. One of them was open source, let’s say ASF licensed, but it had no active community around it, the maintainer didn’t accept patches, and only worked on things that he or she was interested in. The other library was commercial, you had to pay for it, and you were restricted in how you could use it, however once you paid for it, you were given full access to source code, and access to an active community of developers, not only within the company that produced the library but also developers from other companies that were using the library and building on it. Which would you go with?

Why is a community so valuable? As I said before, when you decide to use a library in your system, you assume responsibility for maintaining that library, regardless of whether it’s open source or not. When that library comes with an active community with the like minded goal of improving that library, then when you decide to take responsibility for it, you are immediately joined by a community of people who will help you to do that. Ask any open source maintainer, a community member who sees themselves as part of the solution to any problems they have with an open source library is a peer. They are someone who the maintainer wants to work with, and so when you take that responsibility, you get a whole community of people who are wanting to work with you to solve your problems. This is the great thing about open source, and in my opinion, it’s far greater than the freedom to use the library in any way you want.

Now perhaps you might be thinking that the example of a commercial library with an active developer community is contrived - that would never happen, it’s only because of the freedom that open source affords that such communities exist. Well, that’s simply not true, I have worked in such a community before. Atlassian is a company that sells commercial software with commercial licenses, you are not free to do with Atlassian’s software as you please, you may only use it as the license stipulates. But when you do purchase a license, you get full access to their source code, and there is a vibrant plugin development community that you can join, one that is fostered by Atlassian, where knowledge is shared by both outside and Atlassian community members, and people work together to make the entire platform better. This meets all my of requirements of a developer community, and addresses the risk of including an Atlassian product as part of my system.

So if an Atlassian product was the right fit to be part of a system that I was maintaining, I would not hesitate to choose it. The fact that it isn’t free as in speech or beer wouldn’t phase me in the slightlest, I would choose it for the same primary reason that I choose most open source software - that is that I get a whole community of like minded developers working to help me take the responsibility of maintaining my system. And that’s how I know that the primary value of open source to me isn’t that it’s free as in speech, it’s the community that comes with it.

The big difference between a company structure and an open source project structure is that in a company, there are many different roles, and each role has a number of responsibilities specific to that role. People are hired based on their competency to fulfill the responsbilities required by those roles. In contrast, an open source project tends to have only one role - the committer, and then all the responsibilities of the project are organically fulfilled by the various people who are in that role according to need and interest. When people are selected for the committer role, they are selected on broadly the same criteria, which is based on their technical contributions to the project.

Does this difference have any impact on diversity? Of course there is some impact, since each person in the committer role must have a passion for technical contribution to the project, whereas in a company structure, there will be some people with a passion for technical work in the technical roles, and other people with passion for communication in the marketing roles. But this is a lack of vocational diversity. The issue that we’re concerned about in the OSS world is not a lack of vocational diversity, it’s a lack of diversity of gender, age, race, sexual orientation, among other things. For lack of a better word, I’ll call this type of diversity “identity” diversity, as opposed to “vocational” diversity. At face value, if the pool of people that are passionate about technical contribution are diverse in identity, then there likewise should be identity diversity among committers in open source projects.

So could it be that a lack of diversity of roles - which are vocational based - fuels a lack in identity diversity in people that fill these roles? At this stage I haven’t done enough research to be able to answer this question, but perhaps it’s something that we could start experimenting with in open source projects.

§Putting it into practice

So if we were to try to introduce diverse vocational roles into open source projects, what roles would they be, and what would they look like? To make things a little more concrete, let’s start by thinking about the introduction of a marketing role. Every large open source project does a lot of marketing, from publishing blog posts to tweeting to organising conference engagements to engaging with the community on mailing lists. This is something that it would be quite straight forward to create a role for. This wouldn’t mean that everyone else in the project stops blogging/tweeting etc, that doesn’t happen in a company. It does mean that someone is given the responsibility of coordinating and ensuring that marketing happens.

In order for such a role to work, it needs to be well defined - open source projects are not used to having such roles, so it needs to be made clear to everyone on the project, not just the person in this role, what the responsibilities of the role are. This is necessary to empower that person to be and feel effective in the project. The responsibilities are going to vary from project to project, but in the context of my project, Play Framework, and without having put too much thought into it yet, this is what I’d envision:

Having defined the role, the next step is probably the hardest - finding someone to fill it. Finding people to fill a committer role of an open source project is generally easy, many developers that love using the software would also love to be a committer on it. Finding someone with skills and a passion for marketing who is willing to volunteer their time towards an open source project I would imagine would be a lot harder. This is possibly where my whole thought experiment falls down.

This is just one role that we could look at introducing to open source projects. There are many other possible roles, including leadership roles (in most companies these are not filled by technical people), product management, and a variety of HR roles. I’m not sure how well (if at all) these will work in an open source project, but in order to improve diversity, OSS projects are in need of big changes, and whatever changes are found to work will probably appear unworkable at first. So I think these are worth trying.

Since everyone's doing it, I thought I'd do it too. My contribution to the What people think I do meme: 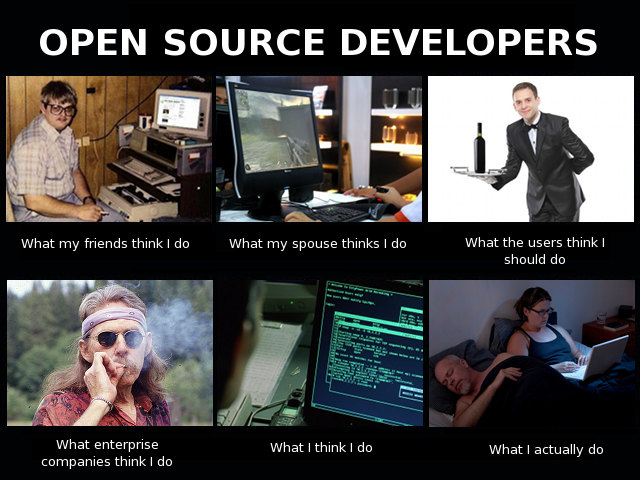