The method of proposal

So, about a month ago, my Mum phoned me while I was at Beth's place. I answered the phone and put it on speaker, and Mum told me she wanted to have a late family celebration for my birthday, saying that she and Dad would be in Sydney on the 6th of December. She said she had found a really nice restaurant just out of Lithgow, and that she had to book and pay several weeks in advance. She asked Beth and I if we were free, which we were, and so we put it in our diaries. Little did Beth know, but this was all a ploy so that she wouldn't suspect anything when I drove her up the Blue Mountains.

So, I picked Beth up at 10am from her place in Castle Hill, and we started driving towards Lithgow, taking Bells Line of Road. About 10 minutes past Bilpin, I got a really bad cramp in my leg. You know how annoying that is when you're driving? It was so bad, I had to pull over and stretch. We pulled over at a pretty ordinary place on the side of the road in the middle of nowhere.

After doing some stretches, I said to Beth "Hey, it looks like there's a nice view here, why don't you get out." So she did. As we were walking around, we noticed an unusual small pile of rocks. Being an immature guy, I decided to kick it over. She also decided to kick it, and then we noticed a very old looking piece of paper underneath. We picked it up, and it turned out to be a letter, dated 1851. The writing on it was very old fashioned, I'll scan it in sometime maybe and attach a picture of it to this post, but for now, here's the transcript. The letter was by someone who had "something", and was being pursued for it. This thing was too heavy, and he had to hide it. The letter contained instructions on how to find it. 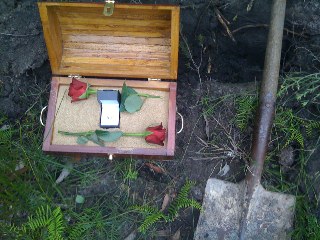 We weren't sure how the letter got there, but thinking that there was a slight possibility that the letter had never reached its recipient, we decided to search for the treasure. We found the landscape exactly as the letter described, and soon we were at the entrance of a small overhang. There was a cross etched into the wall, and nearby we found a very old rusty shovel. So, I started digging, and before long, the shovel hit something hard. It was a treasure chest. I dug up the treasure chest, and opened it. Inside was a ring and two roses, lying in a bed of sand. As soon as I opened it, I picked up the ring, got down on one knee, and recited a poem that I wrote, which ended in "Will you marry me?". I won't attach the poem here, but if you really want to know what it said, ask me. 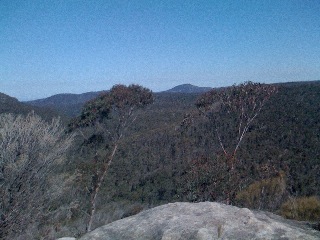 Beth burst into tears (this was my aim) and said yes. After that we headed back out of the valley, up to a high rock with a very nice view, where I had a picnic basket and esky with French champagne, cheese, Caesar salad, fruit and chocolate, and we had a picnic lunch.

As one last surprise for Beth, I took her out for dinner that night, telling her it was a dinner for two, but when we got there both sets of parents were there.

If you're interested in the logistics of the day, I'd been planning for about 6 months, though I didn't have a date 6 months ago, I knew that what I wanted to do would take a lot of work, so I started preparing it so that when I did decide to propose, I would already be half ready. I got up at 5:15am on the morning, drove up to the spot and planted the chest with 2 friends. I then went back to Sydney to pick up Beth while they waited up in the area. I phoned them when we were half an hour off and they went and planted the letter, and then waited for us to get there. 5 minutes off I pranked them, and they left. 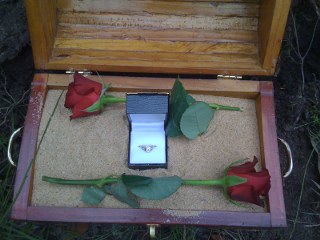 Close up of the treasure chest. 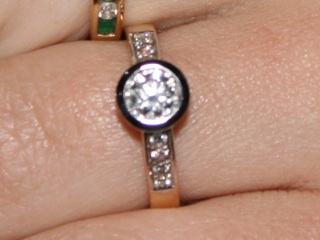 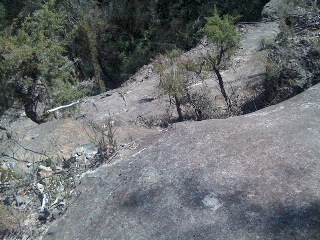 The way down to the treasure chest was very steep and rough. 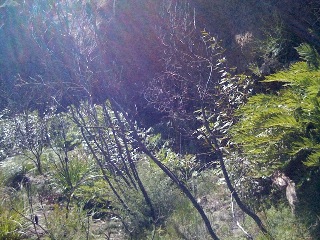 Where the chest was buried.

Many thanks to Mum, for setting up the decoy event and for writing out the letter, to Aaron and Denise, for helping me set everything up and waiting so patiently for me to pick Beth up, to Beth's parents, for arranging dinner that night and help keeping Beth completely unsuspecting of the event, to Leon Milch, for helping me design and making a beautiful engagement ring, and finally to Beth, for being the most amazing fiancée a guy could ever hope for.